It’s been estimated that between one and four percent of children have sleep apnea. As with adults, the overwhelming majority of children with sleep apnea suffer from Obstructive Sleep Apnea (OSA). If you suspect your child may be suffering from sleep apnea, Dr. Katz will make sure they get the correct diagnosis and the treatment they require.

When a child suffers from OSA, it means there’s some sort of blockage in the airway that causes them to stop breathing several times at night while they’re sleeping. This reduces the amount of oxygen in the bloodstream and causes the child to come out of their deepest sleep several times during the night.

OSA results in the child being restless or groggy during the day. It can have a profoundly negative impact on a child’s daytime behavior and their performance at school. Unfortunately, childhood OSA is often misdiagnosed as ADHD or some other behavioral disorder.

Children with OSA exhibit many of the same symptoms as adults. This includes restless sleep, stoppages of breathing during the night often followed by loud gasping sounds, loud snoring, moodiness, and daytime fatigue. Additional symptoms of childhood OSA include:

One major difference between sleep apnea in children and sleep apnea in adults is that childhood sleep apnea is commonly associated with developmental issues. This is often related to the size of the child’s jaw, tongue, tonsils, or adenoids.

Dentists have expertise in how skeletal development is related to airflow and they can often anticipate the onset of sleep apnea in their younger patients. It’s important for dentists to discuss these issue with parents as early as possible. This helps parents monitor their children and look out for signs of developing sleep apnea. 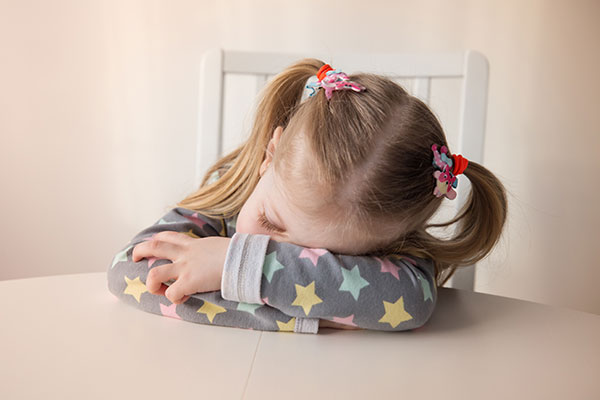 The earlier we can diagnose your child’s sleep apnea, the more effectively we can treat it. An early sleep apnea diagnosis can also spare your child from a considerable amount of grief and turmoil as undiagnosed sleep apnea can make school very difficult for children.

Sleep apnea in children can also come as a result of enlarged tonsils and/or enlarged adenoids. If this is the case with your child, surgical removal is often the appropriate course of treatment. Because children with sleep apnea are still developing and experiencing facial bone growth, it’s often possible to treat muscular and skeletal irregularities before they become permanent. Another factor that can lead to childhood sleep apnea is weight gain. This also an issue that’s best to treat at an early age.

Can a child die from sleep apnea?

Children with untreated obstructive sleep apnea (OSA) may suffer from growth stunts, worsened medical conditions, and even more serious health problems over time. These may include high blood pressure, heart disease, and even death.

Recognizing the symptoms of sleep apnea is the first step to helping your child get the rest they deserve. Once they’ve been diagnosed, Dr. Katz will evaluate them to determine the best course of treatment and help ensure a long, healthy life for your child.

Many children who suffer from obstructive sleep apnea, or OSA, may outgrow the condition. However, children with untreated sleep apnea are more susceptible to developing behavioral problems and health complications.

That’s why it’s crucial to seek treatment at the first sign of the sleep disorder. Contact our Greensboro office to learn more about pediatric sleep apnea and schedule your child’s consultation.